Briefly about the project

THE FOUNDATION FOR SUCCESS

Building a bridge requires extensive preparations, including geotechnical site investigations. Knowledge of the soil conditions is crucial in order to ensure the proper foundation design, including both short and long term bearing capacity, in order to avoid extensive settlements and unnecessary costs. Thus, every foundation design is unique. This have become apparent to the municipalities of Holbæk and Lejre – linked by the Munkholm Bridge from 1952 – as the eastern bridge abutment has settled to a degree, increasing the likelihood of severe damage to the bridge.

The Munkholm Bridge’s foundations have experienced very different subsidence developments, causing large differences in their settlement developments. The largest subsidence occurs at the eastern bridge abutment, which has settled more than 0.5 m. The pillars of the bridge, founded on piles, have not settled. The differences in subsidence cause inappropriately large strain on the eastern bearings of the bridge, a strain the bearings are not designed to handle. In a worst-case scenario, additional settlement might strain the bearings further, which might cause damage to the bridge. Due to this, the Munkholm Bridge has been under observation for settlements since 1955.

Broconsult, consultant to the bridge owners, has asked Geo to determine the remaining subsidence for the eastern abutment, in order to assess whether or not a strengthening of the bridge is required.

The Munkholm Bridge is 114 m long and 12.5 m high from the top of the middle arch to the water surface.

The Munkholm Bridge appears in the Danish movie ’Mig og min lillebror’ (‘Me and my little brother’), featuring for example the famous Danish actor: Dirch Passer. It connects to the fictive island Bomø.

Throughout the lifespan of the Munkholm Bridge, its eastern abutment has settled more than 50 cm.

The Munkholm Bridge over the Isefjord opened in 1952. Up until this point, there was a small passenger ferry instead of the bridge. Langtved Færgekro (Ferry Inn), which burned down in 2009, was situated by the old ferry landing.

Geo's role in the project

FROM INVESTIGATIONS TO ADVANCED LABORATORY TESTING

The site investigations show that the eastern abutment caisson is founded on a 6 m thick sand cushion. During the construction of the bridge, the contractor excavated settlement prone layers at the abutments and replaced them with sand, on which the caissons were founded. Below the sand cushion, at the eastern abutment, Geo’s investigations have discovered 9 m of compressible layers, consisting of gyttja and marine sand with organic content.

Gyttja is a sediment deposited in lakes or at the seabed with a high water content and rich in organic material. When the gyttja layers are loaded, the water content will slowly diminish in the sediment over time, causing the layers to settle. Furthermore, the organic content degrades over time, also causing the layers to settle. Due to this, there is both a primary and a secondary subsidence.

Geo’s investigations indicate a former misinterpretation of the sediment layers below the sand cushion, from when the bridge was constructed. Most likely, the contractor has been under the impression that they had excavated all of the compressible layers and replaced them with sand. This however, was not the case, as the eastern abutment was founded on 9-10 m of gyttja, causing the abutment to settle. Advanced tests in Geo’s laboratory, consisting of consolidation tests, have determined the remaining settlement for the eastern abutment.

Geo assesses that if the eastern abutment is unable to absorb the remaining settlement, the abutment could be reinforced by installing driven piles through the caisson and thereby changing the direct foundation of the caisson to a piled foundation. Based on Geo’s investigations, it is now up to Broconsult to assess, if a piled reinforcement of the bridge is required, or if a renovation is adequate.

Services used in the project 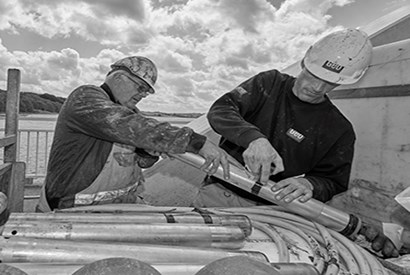