Geotechnical and geophysical investigations for the next Danish nearshore windfarms

In the spring, Geo initiated geotechnical and geophysical investigations for the next Danish nearshore windfarms: Vesterhav Nord and Vesterhav Syd, which are planned located off the west coast of Jutland.

Vattenfall won the tender for the two new nearshore windfarms, and requested Geo to perform the geotechnical and geophysical investigations.

In collaboration with NCT Offshore, Geo launched the drill ship Freja in the first quarter of 2017 with Geo’s new offshore heave compensated drill setup: GeoExperior. The geotechnical drilling work for the nearshore windfarms off the coast of Jutland is the first big project for GeoExperior, since the drill ship was launched.

“The drilling work is performed with Geo’s new heave compensated drill setup, which has lived up to our expectations completely”, says Jens Brink Clausen, Department Director in Offshore Investigations, Geo.

The last phase of the offshore investigations is in progress, after which an extensive laboratory programme in Geo’s laboratory will follow. All data and results from the geophysical and geotechnical investigations are interpreted and reported and will be applied in the design of each individual turbine foundation.

Vesterhav Nord is planned located off the coast of Thyborøn in two slightly displaced rows, stretching south towards Lemvig. Vesterhav Nord will have a capacity of 180 MW, divided between up to 21 turbines, depending on the type of turbine. The wind farm will have an effect equivalent to the annual energy consumption of 180.000 Danish households.

Vesterhav Syd will be located off the coast of Søndervig, stretchning south towards Hvide Sand in two rows. The Syd-windfarm will have a capacity of 170 MW, corresponding to the annual energy consumption of 170.000 Danish households. 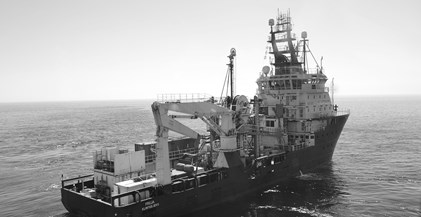 Welcome to the News Room.

On this page you can read news from Geo. Please join the debate on LinkedIn.